Why would you buy a Bullbar?

Most would agree that the number one reason for getting a Bullbar installed on a vehicle in Australia is to provide protection from animals wandering on the roads.

The extent of the issue surrounding animal collisions was illustrated in The Age newspaper in May this year when it was reported that “last year more than 75,000 motorists lodged a claim with RACV over car damage and about one in 14 of those involved an animal.”

“Our national icon (the kangaroo) was implicated in eight out of 10 (or 4,443) such collisions,” the newspaper concluded.

Just this week it was reported that a 21 year old female passenger was killed near Augathella, Queensland after the driver of the car she was travelling swerved to avoid an animal and tragically hit a tree.

The Value of Bullbars to Rural Users report from Coutts J&R in 2015 found that more than 50 per cent of respondents to a survey noted that bullbars have or will in the future save them from injury or death.

According to the report, many of the 208 rural drivers indicated they were travelling up to 160km a day through rural areas, often on secluded roads with limited mobile phone coverage and high numbers of large animals.

They described animal strikes in rural areas as common, with as many as seven kangaroos hit over two weeks in one instance.

While bullbars will not prevent damage from animal collisions in all cases there is a strong argument for their use from people in regional and remote areas. In more remote areas a bullbar can help prevent a person from being stranded in extreme weather conditions following vehicle damage from an animal strike.

For 4WD enthusiasts, a bullbar can provide a mounting point for a winch, recovery gear, lights and other accessories. Likewise twin jacking points, aerial tabs and spotlight mounts can be important for vehicle owners operating in rugged areas.

For tradespeople, a bullbar can be an essential piece of equipment, with ladder tubes and racks being used to carry heavy loads on the top of vehicle.

For adventurers and travellers, a bullbar can also be used to move a caravan from front tow points.

Not all bullbars are made equal.

When 4WD owners are considering a bullbar it is useful to ask “will it fit my vehicle and can I mount the accessories I need”.

Another considerations are what material is it made from, how is it constructed and what is the thickness of the material used. Steel, alloy and plastic are the most common materials. Steel is perceived to be the strongest material but in tests by 4WD Action magazine in 2010, TUFF alloy bullbars were shown to be as strong and durable as their steel equivalent.

Weight is another point to consider when setting up a 4WD vehicle. A steel bullbar may not be as attractive as an alloy or plastic one in some situations.

Other questions to consider are whether the Bullbar meet Australia Design Rules and Standards and if it is air bag compatible. If you are unsure, please speak with the manufacture of the Bullbar.

Differences in details or inclusions are other considerations. For example does it have aerial mounting tags as standard. Another question is how far away is it from the bumper. Country style bullbars have a greater distance between the bar and the vehicle front to help prevent the bar from being pushed into the radiator.

Looks and style will be another influencing factor when considering purchasing a bullbar and how it might suit a particular vehicle.

And finally there is price and as can be expected, not all bullbars are made equal. Some are mass produced and use light gauge material, while others are designed to take whatever the Australian outback can throw at them. Some bullbars are made overseas, whereas others are manufactured in Australia to suit our unique conditions.

It is worth weighing up the options carefully before spending your cash but as the old saying goes, you get what you pay for and when it comes to selecting a bullbar, your life could depend on it. 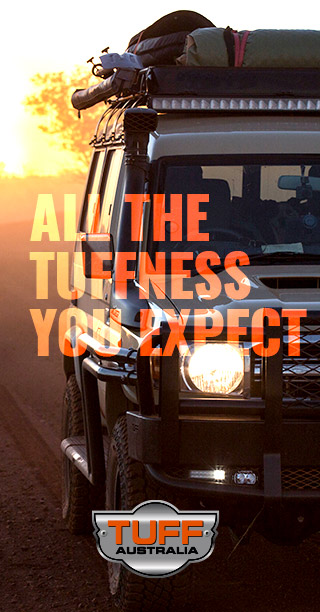